You pretty much couldn't look anywhere without seeing news about the LA River revitalization efforts today.  With the Army Corps of Engineers set to release their feasibility study in August, the LA Times laid out the three most likely results in today's front page article:

1.  Alternative 13, which calls for strategic removal of concrete and restoration of the natural ecosystem at various points of the river between Griffith Park and LA Union Station.  Cost estimate: a cool $444 million.

2.  Alternative 16, which offers the same improvements as Alternative 13 plus river widening to allow for terracing along the edges AND (drum roll please) the green space fantasy known as Piggyback Yards.  Cost estimate: $774 million.

3.  Alternative 20, calling for everything listed above PLUS restoration of the Verdugo Wash (a tributary of the LA River...thank you, Wikipedia), while also connective the river to the LA State Historic Park (which is already set to undergo an $18 million dollar upgrade next year).  Cost estimate $1.06 billion (!)

According to the Times, we may be destined for Alternative 13, the least ambitious of the proposals.  While I'm sure LA River advocates won't be satisfied, I'm also sure that they know this is a long term battle.  Massive projects like this are often implemented in baby steps.  But I propose a different way of thinking about this: perhaps not getting the most expansive proposal is a blessing in disguise.

Personally, I'm not a huge fan of the Piggyback Yards proposal.  While the architectural renderings are impressive (to say the least), it's completely isolated from the residential populations of Downtown, Chinatown, Boyle Heights, etc.

The proposal also takes away a huge piece of real estate which is important for Union Pacific's shipment of goods from the Ports of Los Angeles/Long Beach across the country.  The ports may be taking a PR beating over SCIG, but they're also a huge cash cow for local municipalities and the state of California.

I think that Los Angeles should focus its park ambitions elsewhere.  Specifically, on another nearby site: Park 101.

Why Park 101?  Because it corrects a mistake made decades ago to tear a 10 lane strip through the heart of historic Los Angeles.  El Pueblo is the birthplace of the city that eventually grew to be the nation's second largest.  LA Union Station, one of the LA's true architectural gems, is the busiest train station west of the Mississippi River.  They are both isolated from the rest of Downtown LA by the physical and psychological barrier of the 101 freeway.

This proposal has significantly better centrality for the population of Downtown LA, with the added bonus of shielding residents and office workers from the noisy, unsightly blight of the freeway.  It also provides much better opportunities for development (and therefore a chance at some extra local funding).

Current plans call for a consolidation and realignment of freeway on/off ramps through Downtown.  This opens up some very significant (and potentially valuable) real estate.  Specifically, in these locations: 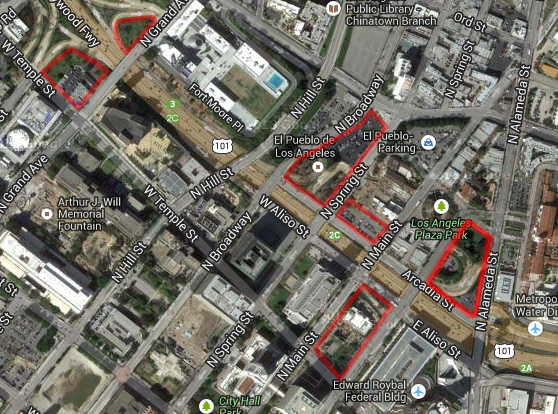 These sites all stand adjacent to the proposed park, and if my memory serves me correctly, are government owned.  Selling these parcels and their associated air rights could raise a lot of money towards the construction of the park.