New information has emerged regarding 3033 Wilshire Boulevard, a proposed high-rise apartment complex which would straddle the border between Westlake and Koreatown.

Los Angeles-based Steinberg Architects, design architect for the project, recently updated its website with a new a page for the proposed 18-story building.  The tower, as envisioned by developer UDR Incorporated, would consist of 190 apartments, 5,500 square feet of ground-floor retail space, and four levels of below-grade parking.  Residential units would range in size from studios to luxury penthouse spaces, each of which would contain two bedrooms and two bathrooms.

Steinberg's design for the building would feature an exterior consisting primarily of glass.  A series of protruding decks would gradually change in shape and size while moving up the tower's mass, giving the facade a fluid texture.  The building would be capped by a rooftop pool and amenity deck, offering panoramic views of Downtown Los Angeles, the Hollywood Hills and the Pacific Ocean.

The project site - located at the northwest corner of Wilshire Boulevard and Virgil Avenue - was first slated for high-rise development nearly one decade ago.  According to the website of consulting firm PMA, the new apartment tower is scheduled for completion in February 2016.

UPDATE 11/22/14: Heavy equipment and construction materials are present at the development site. 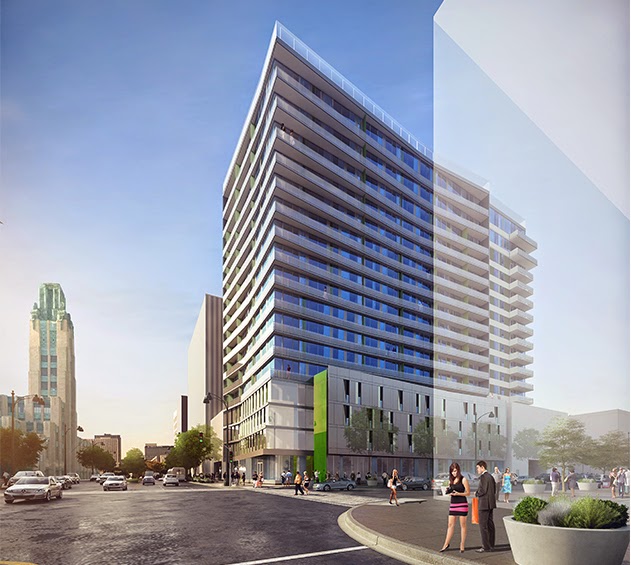